Arusha National Park is a perfect trip for day safaris, as it is close to both Arusha and Moshi. With terrain that ranges from open savannah to tropical rainforest, the park is dominated by the shadow of Mt. Meru – whose summit offers an unparalleled view of Mt. Kilimanjaro.

Size: 542 square kilometres.
Location: North-east of Arusha.
Best Time: Year round. For climbing Mt. Meru, the best time is June-February. For views of Kilimanjaro, the best time is December-February.
To Do: Game drive, canoeing, walking safari, Mt. Meru climb, and picnic sites.
Known For: Perfect for a day trip from Arusha, and a great place to mix a traditional game drive with a walking or canoeing component.

The acrobatic black and white Colobus monkeys welcome you as you pass through Arusha’s main entrance gate. From the lush green swamps surrounded by thick forest in the Ngurdoto Crater, up through the scenic beauty of the Momela Lakes, each a startlingly different hue, through to the chilly alpine like tundra on Mount Meru, Arusha National Park is a gem of a park, althoug very accessable, it is suprisingly not heavily visited by tourists. Explore the diverse and changing landscapes, hike along scenic mountain and forest trails and view huge masses of wildlife in this quaint and charming park.

There are three major attractions in the park. First is the Ngurdoto Crater, which is sometimes called “mini Ngorongoro”. Secondly, there are the Momella lakes, which are shallow alkaline lakes which get their water from underground streams. Finally, there is the spectacular Meru Crater. Mount Meru (14,990 feet) is described as “one of the most rewarding mountains to climb in Africa”. Visitors can climb the mountain, or organize walking safaris. The park also provides great views of Mt. Kilimanjaro and Mt. Meru on clear days. The remains of a large volcano, the Ngurdoto Crater is a steep sided bowl of lush swamps and riverine forest, which is home to elephant, buffalo, warthog, baboon, reedbuck, Colobus monkeys and duikers. Mosses, ferns, lichens and orchids thrive in the damp atmosphere of the crater, giving way to huge mahogany, olive and date palm trees on the drier crater walls. The tranquil beauty of the Momela Lakes brings to the park a wide variety of birdlife (over 380 species) including flamingoes, waterfowl, African pochard, ibis, heron, egrets, colorful turacos and trogons. The rocky crags of Mount  Meru sees a large number of birds of prey and you may be lucky enough to spot lammergeyers, a large, rare bird of prey, floating on the up draughts from the crater. Other game includes hippo, giraffe, zebra, antelope, blue monkey, dikdik, reedbuck, klipspringers, leopard, and spotted hyena. 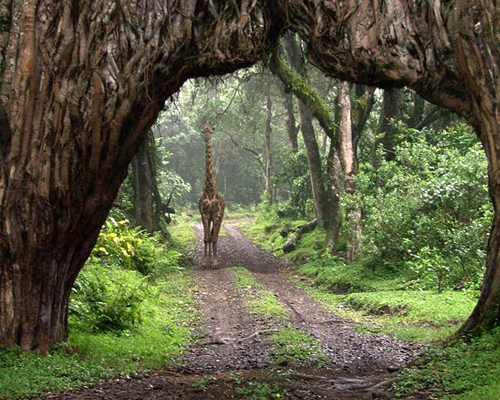 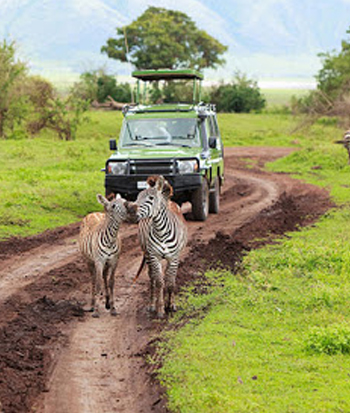