A short drive from Arusha, the Tarangire National Park offers a fantastic game driving experience all year round. Home to Tanzania’s largest population of elephants, Tarangire is the best place to see these gentle giants in their natural habitat – from the adorable calves all the way up to the intimidating bulls. It is also an ideal place to snap photos of the boabab tree (the Tree of Life), as it grows in great numbers throughout the park.

Size: 2,850 square kilometres.
Location: 118km southwest of Arusha.
Best Time: Year round, but dry season (June to September) is the best.
To Do: Guided walking safaris, game drives, and cultural visits to nearby villages.
Known For: Elephants.

Located 120km from Arusha, Tarangire is the sixth largest park in Tanzania. This beautiful park stretches southeast of Lake Manyara around the Tarangire River. Just a few hours drive from the town of Arusha, Tarangire is a popular stop for safaris traveling through the northern circuit on their way to Ngorongoro and the Serengeti. It is the vast number of Baobabs trees that first capture the eye as you enter the park. The gently rolling countryside is dotted with these majestic trees, which seem to dwarf the animals that feed beneath them.
The park owes its name to Tarangire River which flows across the area. Its banks are characterized by dense vegetation of acacia and mixed woodland. The surrounding area however, is dominated by huge baobab trees and to a lesser prominence,olddoum palm trees and black cotton grass. Tarangire also has regions of quite dense bush, but with high grasses and huge old baobab trees instead of the green forests of Manyara. The land is hilly and dominated by the impressive valley of the Tarangire River, which attracts good numbers of migrant animals during the dry months, especially between July and September.

The unique aspect of this Park is the annual animal immigration that takes place during the dry season. Tarangire National Park has some of the highest population density of elephants anywhere in Tanzania, and its sparse vegetation, makes it a beautiful and special location. The park extends into two game controlled areas and the animals are allowed to move freely throughout. From the dryness of July, large herds of zebra, wildebeest, hartebeest and in particular, elephants can be found here in high densities until October when the short wet season allows them to move to new grasslands. Breathtaking views of the Masaai Steppe and the mountains to the south make a stop at Tarangire a memorable experience. 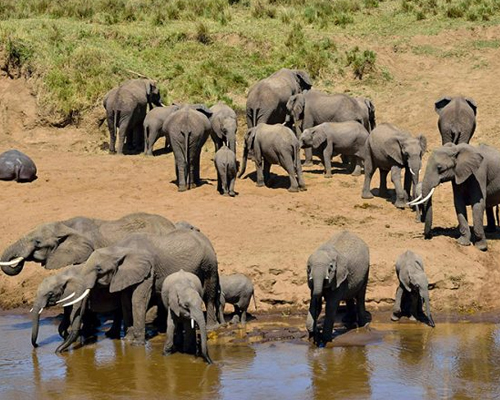 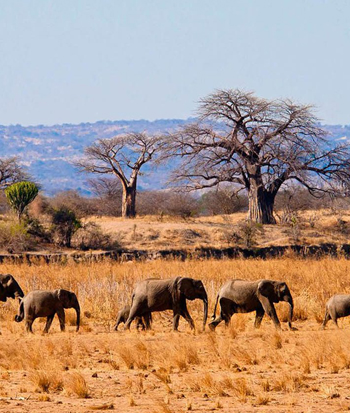