Arriving at Kilimanjaro International Airport, you will be warmly welcomed by one of our experienced driver guides, ready to greet and escort you to Arusha and your chosen hotel. He will introduce you to this wonderful city and country.

After your long flight, you will be pleased to discover that Arusha – the undisputed ‘safari capital’ of East Africa- is perched at 1400 meters above sea level, keeping the temperatures and humidity relatively low. All around this important city are some of Tanzania’s greatest delights. Mount Meru towers above Arusha, while even distant Kilimanjaro can be seen on a clear day. Arusha provides the ideal starting-point for safari-lovers, within reach of Serengeti and Ngorongoro Crater.

The city even has its own natural attraction, Arusha National Park, close by. Named after the Wa-Arusha residents of the town, this busy agricultural, administrative and tourist center is the perfect place to relax after a long journey… and before you set off on safari, the holiday of a lifetime. Welcome to Arusha and welcome to Tanzania! Dinner and Overnight Mount Meru Hotel

After an early breakfast you will be heading into the Tarangire National Park for a morning game drive. The park runs along the line of the Tarangire River and is mainly made up of low-lying hills on the Great Rift Valley floor. Its natural vegetation mainly consists of Acacia woodland and giant African Baobab trees, with huge swamp areas in the south. Both the river and the swamps act like a magnet for wild animals, during Tanzania’s dry season. In the afternoon you will eat your lunch at the picnic overlooking Tarangire River before you get out of the park drive to a lodge situated in the corridor that connects Lake Manyara & Tarangire parks where you will spend a night. Dinner and overnight at Lake Burunge Tented Lodge

Tarangire– This National Park enables you to experience an unrivalled landscape of open plains, dotted with thousands of baobabs. Not only does the meandering Tarangire River attract a vast number of wildlife, but the Park is also especially renowned for its huge elephant herds, enabling its visitors the spotting of entire thick-skinned families!

Tarangire National Park has some of the highest population density of elephants as compared to anywhere in Tanzania, and its sparse vegetation, strewn with baobab and acacia trees, makes it a beautiful and distinctive location to visit.

Herds of up to 300 elephants scratch the dry river bed for underground streams, while migratory wildebeest, zebra, buffalo, impala, gazelle, hartebeest and eland crowd the shrinking lagoons. This park is also home to three rare species of animals – the Greater Kudu, the Fringed-eared Oryx, as well as a few Ashy Starlings. The swamps, tinged green year-round, are the focus for 550 bird varieties, the most breeding species in one habitat anywhere in the world.

Disused termite mounds are often frequented by colonies of the endearing dwarf mongoose, and pairs of red-and-yellow barbet, which draw attention to themselves by their loud, clockwork-like duetting. 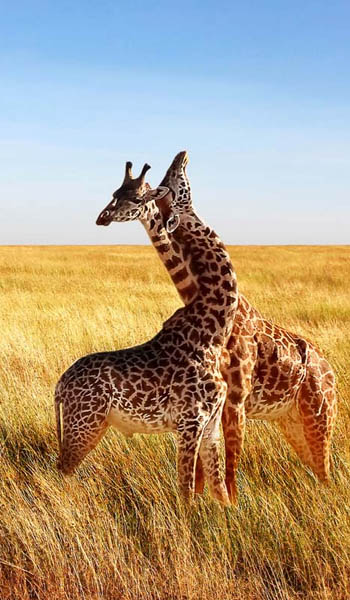 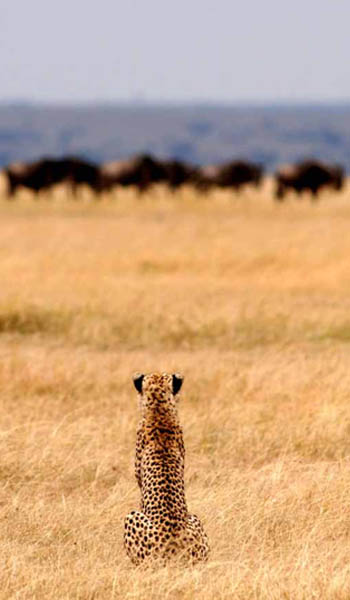 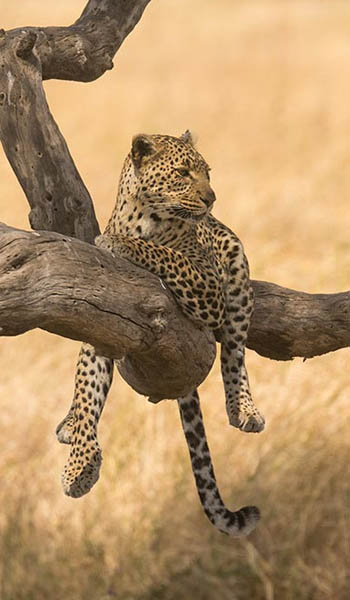 In the early morning, we shall begin our day tour in the place Ernest Hemingway described as “the loveliest I had seen in Africa”: Lake Manyara Park.

Located beneath the cliffs of the Manyara Escarpment, on the edge of the Rift Valley, Lake Manyara National Park offers varied ecosystems, incredible bird life, and breathtaking views.

In contrast with the intimacy of the forest, is the grassy floodplain, across the alkaline lake, to the jagged blue volcanic peaks that rise from the endless Masai Steppes. Large buffalo, wildebeest and zebra herds congregate on these grassy plains, and so do the giraffes.

Squadrons of banded mongoose dart between the acacias, whereas the diminutive Kirk’s dik-dik forages in their shade. Manyara provides the perfect introduction to Tanzania’s birdlife. More than 400 species have been recorded, and any visitor to Africa might reasonably expect to observe 100 of these in one day. Dinner and overnight at Eileen’s Tree Inn Lodge in Karatu.

After an early breakfast, we start our drive to Serengeti and pass by the Maasai Cultural Boma for a cultural tour.

The Maasai tribe lives in southern Kenya and northern Tanzania. They are known for their welcoming dances where the man sings and jump as high as possible with straight legs, to show how fit and strong they are. The woman stands at the side, singing with the man and do a special dance for woman only.

The Masai believes that all the cows in the world belong to them and where given to them by god. The wealth of a family is majored by the number of cows they own.

The Masai tribe lives in villages (Manyata) and each woman builds a small house (Boma) for her family. The bomb’s structure is made of wood and it is covered by a mixer of mud, wood and sticks, grass, cow dung, human urine, and ash. Traditionally, men are wearing sheets that are wrapped around the body. Usually, the main color is red but you can see some blue colors and a paid pattern. Men and women are wearing ornaments made of colourful bids.

After our cultural encounter with this extraordinary ethnic group, we will continue driving to Serengeti while enjoying the game drive along the way. Dinner and overnight at Sametu Karibu Tented Camp

After your breakfast enjoying an early game drive at the central of Serengeti and the western parts where you will spend two days. Dinner and overnight at Sametu Karibu Tented Camp

Serengeti National Park is undoubtedly the best-known wildlife sanctuary in the world and it has the greatest concentration of plains game in Africa.

Established in 1952, it is home to the great migration of wildebeest and zebra. The resident population of lion, cheetah, elephant, giraffe, and birds is also impressive. The Park can be divided into 3 sections:

* The southern/central part (Seronera Valley) with its classic savannah dotted with acacias and filled with wildlife.

* The western corridor is marked by the Grumeti River, and has more forests and dense bush.

* The north meets up with Kenya’s Masai Mara Reserve, is the least visited section.

It is the migration for which Serengeti is perhaps most famous – over a million wildebeest and about 200,000 zebras flow south from the northern hills to the southern plains for the short rains every October and November, and then swirl west and north after the long rains in April, May and June. During the months of July-September the herds will cross the Mara River again and again in search of fresh grass. They will have to face the mighty crocodiles in the river, who are waiting quietly in the water for their opportunity.

Serengeti is also known as the “endless plains” in the Masai language. This will be your area of exploration for the following two days. You will have the opportunity to discover this fascinating area and its wild inhabitants driving through the vast Serengeti Plains.

After breakfast you will depart towards the famous Ngorongoro and on your way you shall stop at the Olduvai Gorge: one of the most important prehistoric, archeological sites in the world, located in the eastern Serengeti Plains within the Ngorongoro Conservation Area.

The gorge is also commonly called “the cradle of mankind”, since it has revealed the remnants of the earliest human beings, being instrumental in further understanding of the human evolution.

From the lodge it will take only 10 minutes to the base-entrance of the crater after your early breakfast so that you can enjoy the best morning game drive. The Crater is one of the most densely crowded African wildlife areas in the world and is home to an estimated 30,000 animals including some of Tanzania’s last remaining black rhino. Supported by a year-round water supply and fodder, the Ngorongoro Crater supports a vast variety of animals, which include herds of wildebeest, zebra, buffalo, eland, warthog, hippo, and giant African elephants. You will enjoy a private picnic lunch in the crater, after which you will have early evening game drive in the direction of the lodge.

The Ngorongoro Crater is the largest unbroken ancient volcanic caldera in the world. In 1979 this nearly three-million-year-old area was designated a UNESCO World Heritage Site. The former volcano crater is also considered to be “Africa’s Garden of Eden”, as it is a haven for thousands of wild games, including lions, elephants, wildebeests, zebras, rhinos, Thomson’s gazelles and buffaloes. The crater is among the 8 Natural Wonders of the World. Dinner and overnight at Tloma Mountain Lodge

Day 9: Ngorongoro – Arusha.
After breakfast, it is with great regret to inform you that your safari has come to an end. While the memories will last forever, we do hope you will return one day to retrace the steps of the adventure you just completed. Our guide will escort you on the final leg of your journey to Seronera airstrip for your flight to Kilimanjaro International Airport. End of Service. 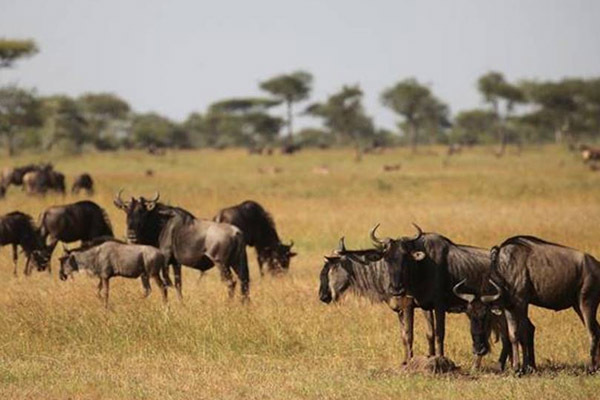 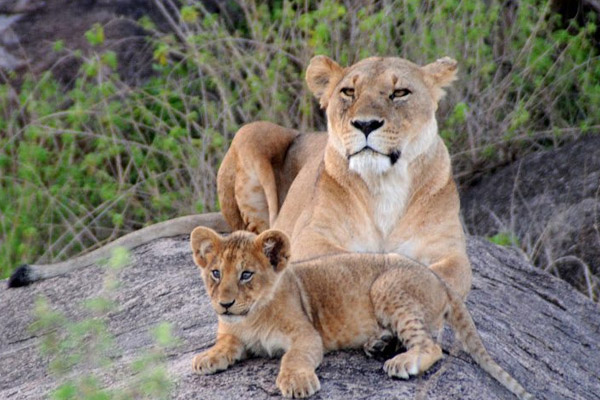